Yesterday, Grammarly (a site that promises to be your best grammar check resource), posted an article titled “5 authors who died old maids” to Facebook (unfortunately, I was not quick-thinking enough to take a screen shot). The post was about great female writers such as Emily Bronte and Emily Dickinson.

I did a double take when I saw that on my timeline. Old maids? What year is this? Who calls unmarried women “old maids?” I commented on the Facebook post that it was sexist and ageist to use the term, and that Grammarly should rename the post. Many others had similar comments and sentiments.  Some ( minority) thought using the term was perfectly OK and that the rest of use were too easily offended.

Then, I went to Twitter where I posted this: 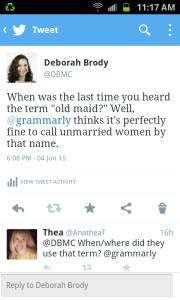 I remind you that Grammarly is a site that claims it offers a “better way to write.”

It seems that Grammarly understood that using the term was offensive enough to some, or at least, controversial enough, to remove the post. They have erased it from Grammarly post history. But Grammarly has not admitted anything explicitly.  It ignored tweets and Facebook comments.

Is ignoring comments a wise move?

And just this past weekend, in the Washington Post Magazine, humor columnist Gene Weingarten had this to say about Grammarly:

In short, as a sleuth, Grammarly is top-notch. As an editor, however, it is of the prissy, arbitrary, rule-besotted sort whom good writers want to kill. Under the circumstances, I would do it slow and ugly, like what Dave the astronaut did to HAL.

Perhaps not super humorous, but definitely worth it to read the whole piece.

Grammarly can’t erase Weingarten’s piece as easily as it can erase it’s own mistakes.

Now, is Grammarly in crisis, even of the fleeting social media kind? No, of course not. But in my book at least, it has a damaged image. Between Weingarten’s criticism and Grammarly’s uncaring attitude, not to mention the fact that a sexist term got through the supposed strict usage checker folks, I am not keen to promote or use the service. And no amount of erasing posts (would this also be called white-washing? I am not sure) and ignoring comments is going to fix that.

What would you recommend that Grammarly do, if anything? Oh, and had you even heard of Grammarly before or am I doing it a public relations favor by mentioning it?