After eight or more days, Pepco finally restored power to everyone that had lost it. And the company finally got back  to advertising how hard it is working to be reliable. This morning, I came across a three-quarter page ad in the Washington Post. It was too large for my scanner to make the whole thing into a PDF but here is the portion I was able to scan: 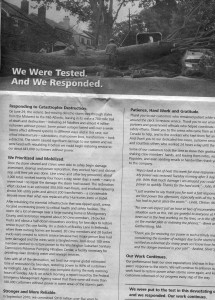 Notice the headline: We Were Tested. And We Responded.

In the ad, Pepco claims it prioritized and mobilized crews. The ad says: “Even with all the destruction, we beat our original global estimated time of restoration by two days…”

Apparently, this ad is designed to convince customers that Pepco not only did what it is meant to do (provide power) but was able to restore power much quicker than it promised. (By the way, this is an old sales trick: tell the customer that you won’t be able to do something until a certain date, and then deliver early, making yourself look good.)  As if this is any consolation to the thousands of people who spent the last week trying to deal with excessive heat, throwing out spoiled food and spending out-of-pocket to stay in hotels and eat in restaurants.

The ad also says “We are stronger and more reliable-but no amount of strengthening to our system could have withstood a  storm of this magnitude.”

What Pepco is doing with that sentence is making excuses. I don’t think people were as upset with the initial loss of power from “a storm of this magnitude” but with how long it took power to be restored, coupled with completely abysmal communications.

Oh but this ad is not all about chest-thumping. No. It is also to say “Thank you to our customers who remained patient while we worked around the clock to restore service.” And also to thank its partners, employees, and indeed itself for “performance that beat our own expectation and was in line with our peers’ response to the storm.”

Pepco concludes that it will continue to “enhance our reliability, work hard to restore power when storms come again, and keep our customers informed of our progress every step of the way.”

Imagine if Pepco had engaged in some community and public relations work instead. For example, Pepco could have sponsored some cooling centers or handed out water and ice. Or what if the company sounded genuinely sorry for the situation its customers were facing? Instead, it seems that Pepco believes that if it tells people what it wants them to believe, then those people will simply believe it.

And again Pepco forgets that people have first-hand experiences to guide their decisions. Most people who called Pepco to report outages or get updates got no information or the wrong information. People who were able to access the Pepco website also were unable to get information. And then there is the reality that most people that lost power waited for at least two to five days to get it back. And that those days were during an almost unprecedented heat wave.

I am not sure who handles communications at Pepco, or who thought that making excuses and spinning the situation is a way to get customers on your side, but that person or persons should perhaps take a break from doing advertising. Advertising, especially something so unapologetic and self-serving as this particular ad is, is not the solution to fixing Pepco’s image.

Pepco is spending millions of dollars on advertising to rehabilitate its image and it is not working.  Every dollar more that goes into advertising, especially something like the ad above, is actually proving how out of touch this company is, how little it understands its customers and how even less it seems to care.

If you felt the need to run advertising, why not run an ad that said something simple like:

We are happy that power has been restored to all our customers, and we sincerely regret the major inconvenience. We promise to do better.

But no, we won’t see any humility or apologies from Pepco. Instead, we will see it ask for rate increases and blame everything from God to the weather for its inability to communicate properly and work efficiently.

1 thought on “Pepco truly believes advertising is the answer”