On Sunday night I watched the movie Trust (starring Clive Owen and Catherine Keener), which is about how a teenage girl gets scammed by a pervert online. I won’t give away all the plot details, but suffice it to say that it is a powerful and sad commentary on the underbelly of the online world, the power of the Internet; teenage angst and desire for acceptance; and parental disconnection.

Weirdly, this movie set the stage for an incident that happened yesterday that has made me think hard about the nature of trust and the online world. 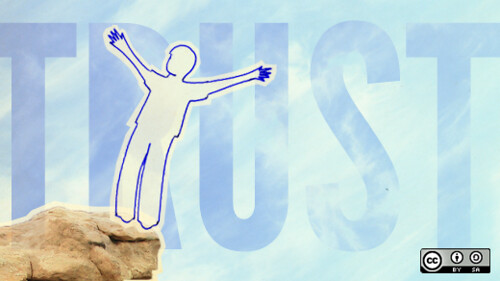 The nature of online interactions makes it hard to know who you are dealing with. As in the movie Trust, a person can provide  a fake name, or picture or any other details. Unless we know otherwise, we are forced to trust the person is who she or he says she/he is.  This is why some of us limit who we are friends with on Facebook or connect with on LinkedIn. Twitter is a bit trickier.

Trust can be gained and lost

This blog and website was built by a virtual assistant/small business web developer whom I found online. I found her through Twitter when I was looking for some VA assistance. Since she had Web and WordPress skills, she fixed a couple of issues on my old website, and then built this website. Along the way, I referred a couple of people to her. But. She was a bit hard to get a hold of. She would disappear for days on end and not respond to emails or calls. Getting the project done was painful and slow. However, I was pleased with the end result.

This person also sold me web hosting on HostGator, as she was a reseller. I paid her upfront for a year of hosting. She assured me that I could deal with HostGator directly if I had any issues. Except when I did have an issue, it turned out she wasn’t telling the truth. Yesterday,  I found I had no email access and my website was down with a page that said “account suspended.” I called HostGator immediately, and to make a long story short, I was told that the account holder–the virtual assistant–had not paid her account and that in order to make changes to the account she would have to contact HostGator. Well, I told you she was hard to get a hold of. I called both numbers I had for her (one was disconnected and the other one went to a voice mail that was not accepting messages). I sent email, and I tweeted her repeatedly. She was not to be found.

In the end, I was forced set up and pay for a new hosting account, and because I had a password, was able to get HostGator to transfer the files. It was stressful. HostGator has all sorts of rules about reseller accounts about which I had no clue. I was told that my website/email could be down for as long as 48 hours. In the end, it was only a couple of hours.

I learned a lesson the hard way. You can’t and shouldn’t trust anybody you don’t know personally (and even then) completely. In this case, I should have retained control of my web hosting.

There is only so much you can do…some people will try to scam you even if you check out references etc. But before you put money on the table, you must do your due diligence and try to verify a person’s credentials. Also, check in with your gut. Your gut always seems to know.

As a marketer, part of your job is to make sure potential customers and clients can and do trust you. Without trust, there can be no business relationship. This is why we include actual addresses, names and phone numbers in our collateral material (including and especially websites). This is why we have customer/client testimonials and provide references.  And this is why third party sites like Yelp and Angie’s List are doing so well.

Trust is integral to marketing a business. Without it, you are toast.

Once trust is broken, you are done. I will never do business with the VA business again. And neither will anyone I know. Because of social media, my voice is amplified. She must not truly understand this because 24 hours later, I still haven’t heard a word. Radio silence in an online world.